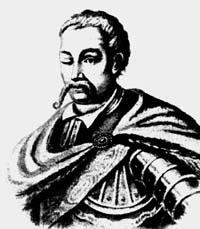 Danylo Apostol (Ukrainian:Romanian: Danila Apostol) (1654-1734), was a Hetman of the Left-bank Ukraine and Ukrainian Cossack starshina.

Born in a noble Cossack family of Moldavian boyar origin, Danylo Apostol was a prominent military leader, polkovnyk (colonel) of the Myrhorod regiment, and a participant in the Russian Empire campaigns against the Ottoman Empire and Crimean Khanate. He fought in the Great Northern War between 1701 and 1705 against the Swedes in Livonia and the Polish-Lithuanian Commonwealth, but in 1708 briefly joined Hetman Ivan Mazepa who sided with Charles XII of Sweden against Peter I of Russia. Later, Danylo Apostol again switched sides and fought on the Russian side, distinguishing himself in the Battle of Poltava. In 1722, he led Cossack units during the Russo-Persian War that led to the expansion of Russian power in the Caspian region. Danylo Apostol lost his eye during the capture of Persian Derbent fortress, this will give him a nickname "blind Hetman".

In the 1723-1725 Cossack starshina, Danylo Apostol was accused of being involved in the alleged mutiny plot of Hetman Pavlo Polubotok and was suspected in treason by Catherine I. In 1727, Apostol was elected to be Hetman of the left-bank Ukraine.

He was Colonel of the Myrhorod regiment in 1683-1727 and then hetman of Left-Bank Ukraine in 1727–34. At first Apostol opposed Ivan Mazepa, then supported him. In November 1708, however, he abandoned Mazepa and the Swedes and joined Peter I. He took part in Russia's Prut (1711) and Persian (1722) campaigns. The martial law established in Ukraine by Peter I after his victory at the Battle of Poltava, the rule of the Little Russian Collegium, and other restrictions on Ukrainian autonomy persuaded Apostol to side with the Ukrainian officers under the leadership of Acting hetman Pavlo Polubotok. Apostol was the initiator of the so-called Kolomak Petitions in 1723. In the 1723-1725 Cossack starshina, Danylo Apostol was accused of being involved in the alleged mutiny plot of Hetman Pavlo Polubotok and was suspected of treason by Catherine I. This led to the imprisonment of Polubotok and a delegation of officers in Saint Petersburg and the deportation of Apostol and his associates. The influential Prince Aleksandr Menshikov, however, supported Apostol for his own economic reasons and helped to secure his election as hetman of the left bank (Ukraine) on 1 October 1727.

The Authoritative Ordinances (Reshitelnye Punkty) imposed on Ukraine by the Russian government in 1728 limited the powers of the hetman considerably. Apostol's rule was characterized by a unique compromise between the old political arrangements and the new, which were more restrictive of Ukraine's autonomy. In the first few years as hetman Apostol accomplished a great deal. He improved the Cossack administration and reformed the judicial system (decree of 1730). To regularize social relations, he put an end to the transfer of Cossack officers' estates into improper hands. The General Survey of Landholdings was conducted in 1729–30 in all the regiments of the Hetman state. Apostol was a diligent landowner, merchant-exporter, and manufacturer. He defended the interests of Ukrainian merchants and tried to modify the commercial system that was imposed on Ukraine by Peter I, a system that favored the Russian merchants and the Russian state. Apostol opposed the Russian elements in the Hetman state administration, where a number of Cossack regiments (Starodub regiment, Chernihiv regiment, Nizhen regiment, Pereiaslav regiment, Hadiache regiment) were governed by Russians or other foreigners appointed by the tsar.

During his rule Malorussia and Cossack nobility increased their wealth and estates at the same time as Ukraine was further incorporated into the Russian Empire. Danylo Apostol died in 1734, and a new Hetman was not elected until 1750.