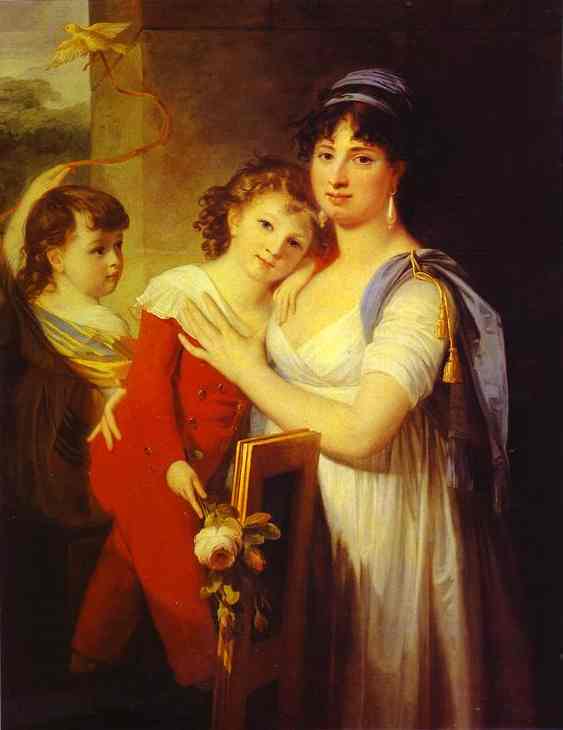 From the Original Oil Painting by Monnier (1799) M. Bibikoff Collection now at the Russian Museum of Art, St. Petersburg, Russia

ANNA SIMENOVNA TCHERNOEVITCH (1772-1810) was the daughter of a Serbian General, Simon Tchernoevitch, who was in the service of the Austrian Army and later the Russian Army, and Elizabeth Kachkine. She married Ivan Matveivitch Mouravieff-Apostol on the 19th of April 1790 and gave birth to three of the Decembrists.

She was quite literary and in 1791 published a French translation of "Examples to Mothers or the Adventures of the Marquis of Bezires". In 1805, after her husband retired from his post as Ambassador to Madrid, and she had decided to take up residence in Paris, it became necessary due to the state of aggression that existed between France and Russia for Napoleon to approve her move. He wrote:" as long as virtue is honored in France, Madame Mouravieff will not suffer any impediment to her desires".

In 1809, upon reaching the Russian border and seeing the joy in her children's eyes to see their homeland, she told them:"I have something dreadful to tell you. You will now learn about something up until now unknown to you: slavery." She so disliked the corrupt and savage practice of slavery that she had never spoken of it to her children until that moment.

Madame Mouravieff-Apostol died in Moscow on the 28th of March 1810 and was buried in the Novodevitchy Cemetery. The epitaph on her tombstone read: "S.t.t.l. Temerima conjunx. Optima matrum". During her 20 years of marriage, she bore three sons and four daughters.